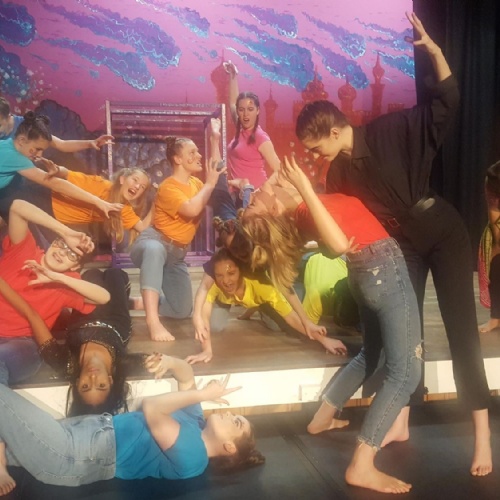 This year's school production of Arabian Nights was incredible! In the last week before the show, there were flecks of glitter everywhere and last-minute tickets were being sold from a seemingly endless pile in the foyer; the excitement was building and nobody could wait for the show to start. As the action unfolded, the audience were told the story of Scheherazade, a brave young woman who uses the power of stories to heal the heart of the cruel ruler Shahryar. Within this tale were several short stories, some full of suspense, others simply hilarious and all of them entertaining. From sarcastic talking birds to wonderfully stylised choruses, Arabian Nights had it all. The audience were completely immersed in the tale by the very nature of RHS' productions - the amazing acting from all corners of the room had you whipping your head around desperate not to miss anything. By the time the show drew to a satisfying close, everyone was in awe of the array of beautiful costumes, stunning hair and makeup and breathtaking acting that we have come to expect from the school productions. So, from the audience that were able to lose themselves in another world for an evening, well done!