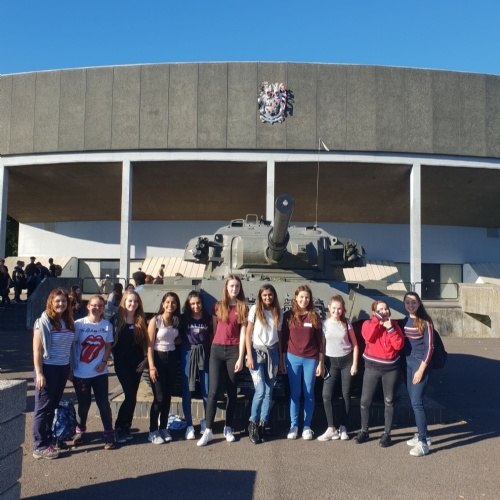 10 Students from Years 11, 12 and 13 attend the Youth Leadership Forum at the Royal Military Academy Sandhurst

The Sandhurst Military Academy is a majestic place, comprising of tall white buildings and a towering Officers’ Mess and a couple lakes. But I think the best way to describe the day is the fact that we barely had time to notice the surroundings, given the intensity of the activities, and so I’m hugely grateful to our group leader for finding the time to point them out.

In terms of format, the timetable was quite simple: an introductory lecture by the Sandhurst leadership team followed by three workshops, of which the content ranged from practical activities to discussion groups on the nature of leadership. With everyone having been separated into different groups (which added by no small measure to any initial fear we had), we were soon involved in the workshops and had a great time meeting new people too. By far the best aspect for me, however, was a discussion led by a top corporate accountant, where we thought about the future of leadership, and engaged in short social experiments to explore how it exists today (though perhaps that was just me enjoying the theoretical side of things as usual). The day as a whole offered something different for everyone though - and I know some of the others far preferred the physical teamwork activities, which I was relatively reticent about to begin with, having done the like before, but I was pleasantly surprised at the challenge they provided. Honestly, I cannot exaggerate enough on just how varied the workshops, and the experiences people gained from them, were. But I guess that’s just what I wanted to say about the day - you took what you wanted from it - irrespective of whether that was a theory or a boost to your self-confidence. Like leadership itself, it was something that you could (should?) adapt to the situation.