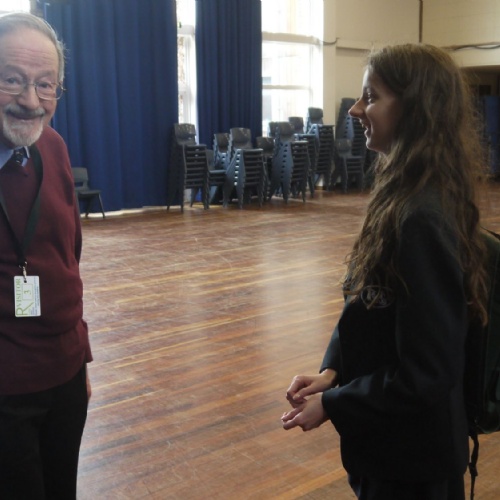 We were  privileged to play host to Dr Martin Stern, an immunologist and holocaust survivor.

Dr Stern told us about the appalling events that happened to him when he was just five years old. For instance: getting taken from school and being arrested along with his one year old sister Erica,and being sent to Theresienstadt with the cramped and awful conditions, both in the camp and journey. Theresienstadt was a unique camp which was sometimes inspected; because of this, it was made nicer and some prisoners were treated better than in other camps. Dr Stern went into detailed history about the events that led to this tragedy, the facts of which shocked many of us, not fully knowing the extent of the persecution. It was an eye-opening talk, full of details and specifics. We were also told about: the incredible luck Dr Stern had come across during this time (for example being taken to Theresienstadt not Auschwitz); how he knew many people had risked their own lives for his; and how incredibly grateful he was. This was particularly emotional as Dr Stern really showed us how good humanity could be in times of crisis. Dr Stern finally made it out of the camps being liberated in 1945 and gave us a real insight to what happened to people who were liberated, and how difficult it was to integrate back into society, including being separated from the woman that saved his and his sister's lives.

Dr Stern was a truly inspirational man and his talk had a profound effect on many students here.