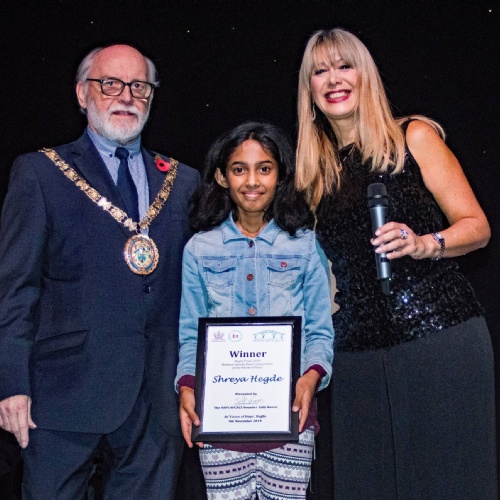 John Lennon is not alone anymore....there is a new ‘Imagine’!

Tally commented, “Imagine by John Lennon will always be one of my favourite songs, but when I read "Imagine Peace," it was so refreshing to have a song probably inspired by the original, yet so relevant now....and with the voice of the young generation"

What sets apart the NSPC4PEACE from other competitions, is that the winners’ poems will be turned into popular songs and they will receive their award at a special House of Lords event hosted by Lord Eames OM, later this year.

The competition has already enlisted the support of well-known judges from the arts world, such as singer-songwriter Katie Melua; Don Black; Pete Brown; Tim Heath, Chairman of The Blake Society; and founder, singer-songwriter Tally Koren.

On the left the Mayor of Rugby Cllr Bill Lewis , Shreya Hegde and Tally Koren.

Our thanks are due to to local charity Benn Partnership Centre for working with young poets and coordinating events locally.

what a wonderful world it would be!Imagine if…

we open the gates,

not shrug them away,

we see colours as shades,

not as skin tones,

what a wonderful world it would be!!

the spirit of chaos

in its vice-like grip

and friendship permeates all nations,

What a peaceful world it would be!!