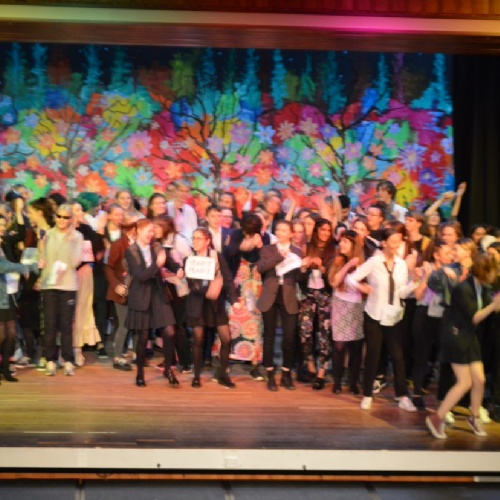 The Sixth Form Entertainment show is a much looked forward to event marking the end of the Autumn term.  After the formality of Foundation Day, everyone enjoys the fun and chaos of 6th form entertainment which is produced by Year 13s in their last year here at Rugby High.

Lasting for roughly a period (50 minutes), the play takes a light-hearted approach to making fun of the teachers and staff. This year's performance was about the new SLT changing the heads of department and making English the key subject. From battle re-enactments in history with Ms Mason to reading in maths with Mrs Jolly and ‘child- friendly’ biology with Miss Danks, each lesson was a bit... different with the new heads of subjects.

The audience’s favourite part of the play was undoubtedly the ‘TikToks’ that the sixth formers had made with some of the teachers. Despite this, there was a lot of moments that stood out including the history v geography rap battle.

Ellie Shawcross, who starred as Puck in the school play and Ms Gregory in Sixth Form Entertainment, reveals what it is like to be in her last play and how rehearsals. “It was so strange [performing in her last play], the sense of camaraderie and the pride you get from taking part is something I’ll cherish for a long time to come. It’s SO sad having to leave it behind, it symbolises to me that my 7 years at RHS are finally coming to an end."