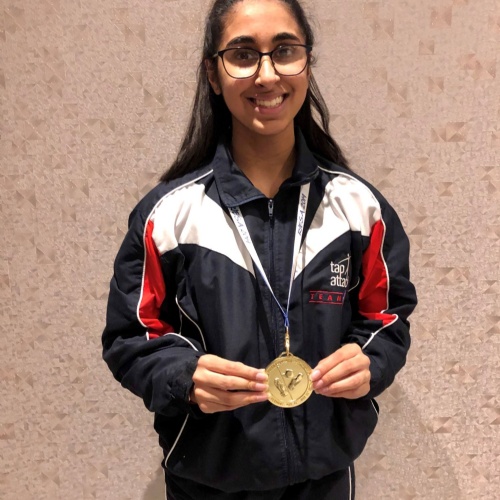 An Intervies with Nikita Billa-Patel, a member of the GB tap dancing team

Recently a member of our own RHS community was involved in an incredible opportunity, where she performed as part of the GB tap team at the IDO world tap dance championships. Nikita Billa-Patel in Year 10  spent the last week of November in Germany participating at the competition, and I got the chance to interview her about the experience.

Can you explain to me a bit about the competition-what were the stages of preparation before Germany, and what happens afterwards?

The competition is held in Germany every year, to enter you have to audition in June and be a member of the tap attack associates. We began rehearsals for the competition towards the end of August and rehearsed every Sunday all the way up to the competition. Everyone in the team became  really close.  We have members all the way from Scotland and Wales, so we might not see each other again after the reunion party that we’re having in January.

How long have you been tap dancing and how did you get involved with the sport?

I didn’t start tap dancing until I was around 8 or 9 which is pretty late compared to other dancers. My family had moved to a new house and my sister asked to start dancing. I didn’t want to, but my mum still signed me up for it and I found that I really enjoyed it. I decided I wanted to try tap and ever since then I just loved it!

How did it feel winning?

Winning was just the best feeling you can imagine, I just felt on top of the world. The team and I were waiting backstage for the results. We never thought we would even get that far and when they announced we had come first and had won the Gold Medal,  the whole team just screamed with excitement and started crying! It was just amazing and an indescribable emotion.

What was your favourite memory of the experience?

My favourite memory would be just being on stage and performing the routine that we put so much hard work into. It was a really special routine and had an emotional storyline. Being able to perform it with people who have become your second family even though you’ve only known them for a few months was magical.

I would never have been able to do this without the help of my incredible dance school and dance teacher who taught me everything that I know about tap. So, a huge thank you to my dance teacher Jill and Dance Kraze who have been so supportive.