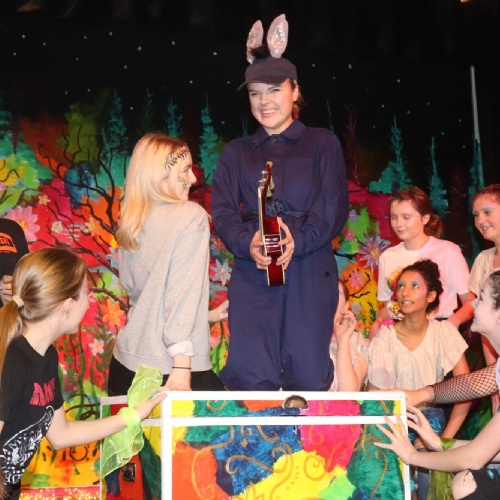 Read on for a review of our School Production. ...

An explosion of colour and talent arrived at Rugby High School last Wednesday evening in the form of the annual school play – A Midsummer Night’s Dream. Undoubtedly, taking on Shakespeare is a daunting task, but Ms Mason and Becky Nown directed a show that was not only spectacular and clever, but fresh and modern.

Opening with a court scene, we were introduced to the four main (mortal) characters: Hermia (Sophie Roberts), Lysander (Fatima Krida), Helena (Sonali Vaghela) and Demetrius (Sarah Kelly). Their carefully stylised costumes perfectly portrayed the characters’ youth and modernity, with a preppy vibe. And whilst on the subject of costumes, we can’t forget the amazing costumes, hair and makeup of the chorus fairies, named fairies and especially the beautiful, floral and colourful designs of Queen Titania and King Oberon, played by Jess Matthew and Emily Goodwin respectively. The edgy combination of bold colours and band tees mingled perfectly with the classic rock music used throughout the performance. The songs used in the play were performed live by incredible musicians found right here at our school, from the younger years right through to year thirteen. The whole performance seemed to go without a hitch and everything flowed perfectly, music, dancing and dialogue.

All of the characters of this Shakespeare classic were played wonderfully, but one of the audience’s favourites was the mischievous fairy Puck, played simultaneously by Edie Fenson and Ellie Shawcross. They portrayed Puck’s playful personality perfectly, and their hand-painted costumes added to the overall effect of childishness and impishness that they brought to the part. Another stand-out performance was the incredible Bottom, played by the comedically talented Gemma Rule. We interviewed her on her performance and the play:

What was it like to play a character as vain and full of himself as Nick Bottom?

I found it really fun and exciting because it allowed me to exaggerate and have loads of freedom with my performance. However, it did take me a week or so to get into the mindset and start to be more creative, and I wouldn’t have been able to have so much fun with the character if it wasn’t for Ms Mason and Becky’s ideas and directing.

How long did it take you to rehearse the part until you were word-perfect?

I would say it took around 3 weeks for me to get the rough idea of my lines, and another week or so to get them word perfect. Rehearsals really helped me to get each line word perfect though, because knowing what I need to do in each scene helps me to pin each action to a line.

What kind of reaction were you looking to gain from the audience with your humorous portrayal of Bottom?

I really wanted the audience to enjoy the performance mainly. I wanted to ensure that they were engaged and hopefully excited as the rest of the play continued. My main aim was to make each person in the audience leave having had a good belly laugh and a great night.

We both watched the play on its opening night and it was a truly magical experience. It really felt as though the actors were transporting us to another world where all sorts of mysterious things could happen. But we weren’t the only ones- a parent said “It was phenomenal to see all the different talents of Rugby High School coming together. I was proud to be a part of it.” It just goes to show that anyone can enjoy the marvelous spectacle that is the Rugby High School production, and we can’t wait to watch it next year!