Highest Performer in OCR's Fine Art GCSE in the country 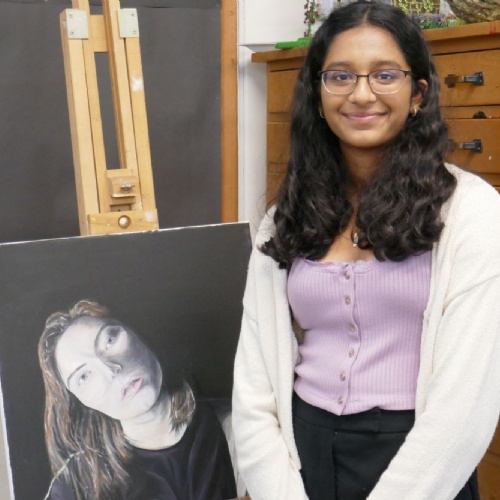 Neha has been named the highest performer in OCR’s GCSE Art and Design: Fine Art in the June 2019 examinations.

Neha, who is now in Year 12 at Rugby High, said that she  was very proud of gaining 100% in the GCSE exam, but that  this nomination was really unexpected! She  found it hard deciding whether to take drama, music or art GCSE, but in the end she chose art as she said "Although it was probably my weaker subject, it was the one I enjoyed most."  She  likes the challenge of depicting movement - and that influenced her final GCSE piece which she called ‘Superstition’.  It symbolises the connection between nature and people, using the hands to illustrate wings.

Neha is  now studying 4 A levels: Physics, Maths, French and Art and ishoping to study architecture at University.

Miss Stirling, Head of Art says: “We are so proud of Neha and it was a delight to receive this news.  Neha has been consistent in every assessment objective for both Units and her work is innovative, skilful and sophisticated.”