Inspirational people from the last 100 years 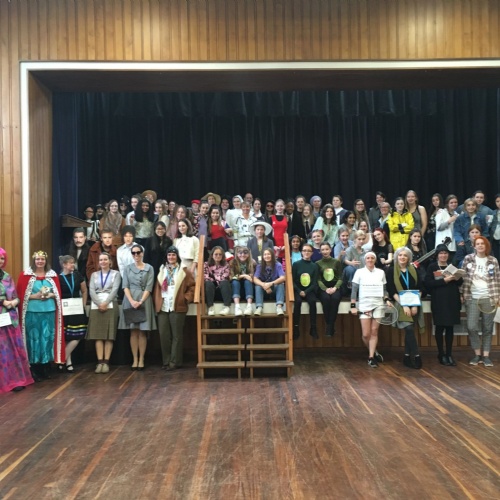 Our 100 Anniversary celebrations continue with a dressing up day

A couple of weeks before half term Miss Danks announced in assembly that the Friday back after half term would be a dress up day where all students would be invited to dress up as influential people from the last 100 years. The event was to celebrate the centenary of RHS itself and since the announcement in assembly there was a buzz among us students, we shared ideas on who we were going to be from incredible female scientists to famous singers and political icons. The problem was however that on the first week back many students (including myself) were left with a problem- we had not finalised our ideas and still didn’t know exactly who we were going to be. Indeed, we had many ideas but toyed between them and never set on one. During the first week back, we were met with persistent reminders of the dress up day at form time and looming pressure began to surface. Every time someone mentioned Friday’s dress up day a nervous energy began to fly around those that had not yet chosen. It was only Wednesday when my friendship group and I sat down and faced our pending fears- what were we going to dress as? But then an idea struck, none of us could think of individual outfits so why not go as a group outfit. And that we did-so we began to sieve through the group outfit possibilities there were suggestions of: the Beatles, one direction, spice girls and ABBA but ultimately, we decided to dress as the most iconic of all. Queen. Everyone instantly recognises the iconic Freddie Mercury white tank top outfit, and everyone can belt out the lyrics to “we are the champions” therefore there was no better idea.

In a mad rush we collected various pieces, borrowing from each other when needed in order to style the perfect outfits in order to replicate the iconic band. Miraculously in two days we had the outfits and arrived at school dressed as the members of the famous band. Walking through the school corridors you could see inspirational people from the years there was everyone from Fred Astaire to Taylor swift, Gandhi to Bill Gates. And as you walked through the corridors it was impossible for a smile not to creep onto your face. Although the preparation for this dress up day was stressful it was extremely fun seeing everybody throw themselves into the outfits and classic Rugby High school craziness.

Friday 8th November: Centenary Dressing Up Day in celebration of our 100th anniversary when both staff and students dressed up  as influential characters from the past hundred years. Everyone thoroughly enjoyed the day and dressed up with a variety of different costumes, such as soldiers, scientists, climate change activists, historical figures, suffragettes and pop stars.

In the enthusiastic Rugby High School fashion, even the teachers gave their all with their outfits, dazzling us with costumes like superman and Elvis Presley.   Millie Woods 9G, excitedly said, “It was such a good day! I loved seeing what everyone dressed up as and it was great to see everyone's favourite historical figures.”