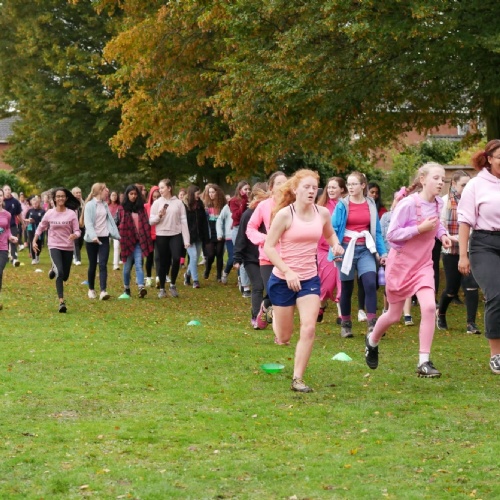 Pink day; possibly one of the biggest events of the school year here at Rugby High. On Friday the 25th of October, students and staff alike dug out their pinkest outfits and took to the field for the Race for Life, which last took place at our school back in 2017. The aim of this event is to raise as much money as we possibly can for cancer Research UK, who do incredibly important work finding out about cancer, discovering new vital treatment and more. Thanks to everyone for donating a pound for the privilege of dressing in pink (some of you really went all out on that one!), plus everyone’s sponsor money from the race itself; we are expected to raise a huge amount for CRUK. Though the weather was unfavourable, we had a really great turnout, and whether you ran, jogged, walked or just wore pink, we are thankful to everyone for doing their bit.

This wasn’t the only event happening on pink day though;  many of the year sevens met up with their year twelve buddies to take part in an activity where they wrote messages to each other on pink post-it notes, which you can see on display in the school reception.

The general feeling  on the  last day of term was really positive, with everyone having fun and keeping upbeat, including those teachers who ran the race; Mr Grady, Mr Philips and countless who others took part.  Members of 9G also took it upon themselves to paint the nails of their form tutor, Mr Paterson… Students have expressed just how much they enjoyed the day, with girls describing it as “interesting”, and another student saying that “it was really fun” and they “look forward to it next year”.