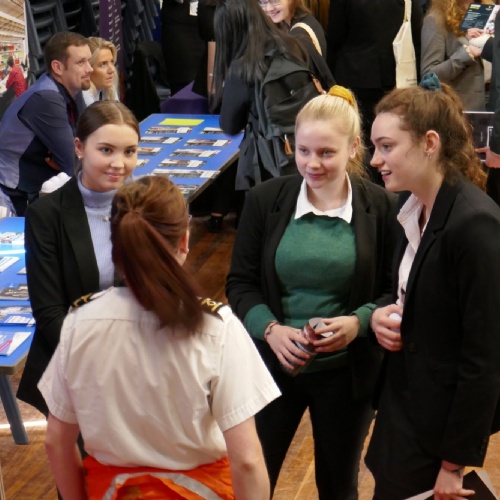 Last Thursday, a careers fair was hosted for Years 9, 11 and 12. There was a variety of stalls including lots of local universities and colleges such as Warwick, De Montfort and Newman. Not only were there universities and colleges, but also apprenticeships and job opportunities. Most of the representatives were very enthusiastic about where they were representing and were happy to answer any questions anybody had. A slightly different career option was the Merchant navy. Speaking to Heather Ennes, Careers at Sea Ambassador, the merchant navy comprises all other aspects of the navy other than the royal navy, so from cruise ships to haulers, it covers them all. "The Merchant Navy is a career worth looking into for both males and females if you like to travel, want some responsibility and fancy a challenge. One day you could be the Captain of the ship, or even the Chief Engineer overseeing the running of the engine department. Once qualified you have the possibility to only need to work half the year, for great pay, and to become part of a family unit whilst on board. Sponsorship is offered through nautical college or university, for both Deck Cadet-ships and Engine Cadet-ships, so check out www.careersatsea.org for more information”. Some of the other stalls that were at the careers fair are as follows:

“It was very eye opening and it taught me about many more career and education options” says Clara Woodhead, 9G. As all the ambassadors of each stalls have said, more information can be found at their websites. We all thoroughly enjoyed the opportunity to explore further options at the career fair, as the Year 9’s are looking to pick their GCSE’s, the Year 11’s their A Levels and Year 12’s their opportunities for jobs and universities. We all took pleasure in the chance to look around for career options.